As Digital Communities Seep into Meatspace

Someone told me that each equation I included in the book would halve the sales. I therefore resolved not to have any equations at all. In the end, however, I did put in one equation, Einstein’s famous equation, E = mc^2. I hope that this will not scare off half of my potential readers. — Stephen Hawking in A Brief History of Time

John and I would often kick this quote around while writing Dungeons & Dreamers. Of course we weren’t writing about the quantum nature of the universe, but we knew that too much talk of computer games and Dungeons & Dragons would scare off general readers. The more we focused on the history of games, the less we’d tell the story about the people who were making and playing the games.

Our story is decidedly about the people who played, and the communities those people built. Our reasoning was simple: If you want to understand the 21st century digital world, you need to understand how and why people use these virtual spaces to enhance their own lives.

Eleven years after the first edition and on the eve of the second edition, we can see how these games have seeped into meatspace more than ever. And one of the aspects that I want to capture on the blog is just how diverse those community interactions have become.

Unpaid bill in fantasy world carries enormous cost for ‘EVE’ players: “He wasn’t scheduled to work in real life Monday, so he spent the entire day sending virtual ships into the fray. He said dozens of his alliance members took off work to join the fight, which is being waged by more than 4,000 players — and spectated by thousands more on the game streaming service Twitch.”

Why I think I’ve tired of MMORPGs and what might change that…: “I want to be just someone fighting the good fight. Is that too much to ask? I play MMOs to play with others, not for the single person story line.”

Logan’s Run…the Run: “This February, The Multiverse Council brings you Logan’s Run, brought to life as an epic live-action street game in the alleys of San Francisco.”

Dungeons, Dragons & Dyson – 28 Questions & Answers: “So, to show my support for the idea while maintaining my disdain for the end result, here’s a single-entry version of the entire 28 days of the current Blog Hop Challenge.”

Dungeon Master Meets Namaste in New Role-Playing Yoga: “But in Indiana’s creation, the dungeon master stands in front of a yoga class and narrates an action scenario. Yoga instructor Sarah Dahnke then directs the group, all in spandex and on yoga mats, to do specific poses that she has created for the game.”

Storyboard: Secrets that aren’t helping: “The problem is that in roleplaying, some secrets are just plain better than others.” 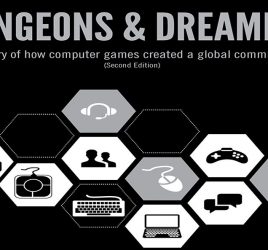